A while back we at Complete Renewables invented the ‘Solarge’. This was in response to the growing demand for electric vehicles. The idea is simple: install solar panels on your garage’s roof and charge your electric car. In practice though there are complications. Firstly when the sun’s out, it’s likely your car will also be out. Secondly the set-up costs were proving to be expensive.

However we did create a few clever solutions. To combat the badly timed sunshine a Sun Bat was employed. This device connects directly to the solar panels and essentially acts as a large battery. This allows the user to capture the sun’s power during the day, then discharge at night. Furthermore as the system is grid connected it would be eligible for the Feed-In tariff. So whilst you charge you car, you would also receive payment for doing so. Put simply you get paid to fill-up your car. Now compare that to the costs of a petrol or diesel tank of fuel and you’ve got quite a good deal.

Lamentably we’ve not managed to get the idea of the ground, we’ll need to wait for electric cars to gain popularity.

However whilst we’ve been getting on with other forms of renewable energy, it appears BMW have been thinking along the same lines. In preparation for their upcoming range of electric vehicles they’ve been working on electric car ports. Admittedly the name isn’t as catchy as ‘The Solarge’, but it sounds essentially like the same thing.

Well good luck to BMW, if they need a hand with development I’m sure they’ll get in touch. If you’d like to read more about this click here to see the original press release. Or if you are interested in a Solarge yourself, then please email me for more information 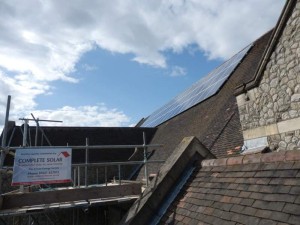 Over the last year we’ve been working with Crowstone St. George United Reformed Church to install a 12.5 kW system. Larger projects such as these are necessarily more complicated and so can take some time to complete. In the case of Crowstone church, there were various internal factors which added to consultation time prior to installation process. Such factors are based on board approval, general announcements/notice time and revenue raising. During this time we are often called on to provide more information and even sometime present information to various groups. We’re always happy to take this time to do this. We appreciate that when many people are involved, and when the interests are broader than a private installation, it pays to take the time to ensure that every aspect is covered. 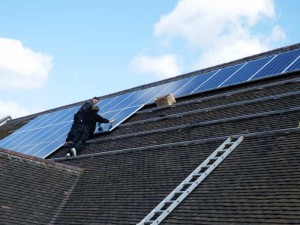 The installation itself was for an array of 50 250W panels, with an estimated yield of 10,730kWh per year. The Feed-In tariff is available for commercial entities for an amended amount. This still represents a great investment. For commercial organisations the Feed-In tariff will provide a significant long-term revenue yield. Installations of this type are also popular for farmers, supermarkets and most large buildings. Whereas domestic households use most electricity during the evening and at weekends, commercial premises generally use their power during the day. This can represent significant saving as less power is returned to the grid and instead used on site.
As you can image installing 50 panels on a historic church’s roof involves a great deal of responsibility and careful treading. Scaffolding was installed to ensure that our workmen had easy access to all aspects of the church’s roof. Furthermore we took great care when working with tiles of this age.

We are happy to report that the church installation was a resounding success. The job was completed in under a week, in keeping with our agreed timetable. The system is currently running and generating a healthy return for the church.